My Holy Man
I don't know why I suddenly thought about my holy man whom I haven't seen in years, and the compulsion to write about him at 3:30 am. Hmmm....oh dear, I hope he's ok. I'm not going to question the compulsion. I'll just write.

Baptismal Rite
At the outset, let me present myself as an atheist...an atheist with a holy man - Fr. Terry Gallagher. I believe it was in 1991 when I was invited by a friend, Ike Cuyegkeng, to attend the baptismal rites of his son in a neighborhood parish in Scarborough, Ontario, Canada. I didn't really care so much for church going but I went anyway. 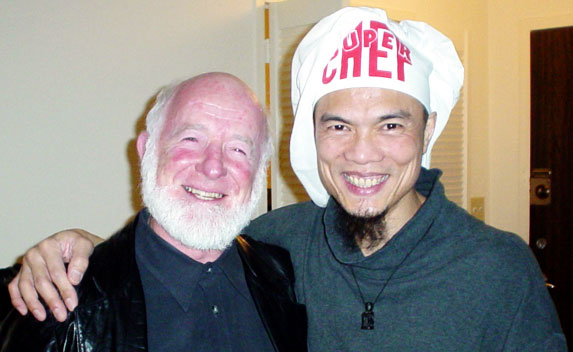 Mesmerized
Fr. Terry Gallagher was the presiding priest. He was an amiable bearded guy who exuded an openness and accommodating demeanor that I found most pleasant. When he started preaching, I noticed this guy wasn't mindlessly reciting a memorized dogma. He made the issues relevant to current times, put it in front of our faces and challenged us to make our stand. This guy wasn't some bullshit artist. I saw in him a humanist who sincerely wanted to confront human issues beyond the walls of the church. This guy's heart was in the right place and he had the eloquence and authority to present everyday issues with compelling urgency...an angle that made me look at it twice. I was amazed at this man as I sat down listening to every word he uttered.

Atheist-Turned-Church Goer
While he was completely oblivious to my presence, I've made a decision right there and then to cultivate a relationship with this wonderful person at some point...notwithstanding or despite of him being a priest. Without introducing myself, I went to hear his mass every Sunday and listen to his wise counsel. It was a drive to his parish from my house but it didn't matter. Sunday was my 'personal' time with him.

No More Sunday School for Me
Without notice, he disappeared from his parish and was replaced by a bible-reading priest who confined the church's role within the 4 walls of his building. Hey, I can also read. That was also the time I stopped going to Sunday school - not without Fr. Terry.

Where is He?
I don't know what happened to him after that. Years passed but he would pop up in my mind every once in a while. What has happened to him?

A Personal Crisis
It wasn't until many years later, when I was hit with a personal crisis that I started seeking him out. He was my last resort. Sheer will power alone couldn't help me. I seek ed professional help but nothing came out of it. I read self-help books that didn't do anything. Fr. Terry was my last card, and I didn't know where to find him.

I Found Him
I asked around, went back to his old parish and did a few detective work. It's funny. I was there spending a lot of time and effort looking for a man who didn't even know I exist. I can't remember how, but I finally nailed him down. He was working for the Scarboro Mission. It wasn't a parish. He was no longer seeing people. Apparently, when he still had his parish, he would involve himself endlessly with the personal struggles of his flock. It weighed him down until he got sick.

A First Meeting
I called him up and he agreed to see me. We met and I finally got the chance to introduce myself. To him, I was a guy he just met. To me, he was a long lost friend whom I have searched far and wide for. I was simply grateful that I found him. We talked and he dispensed me his wise counsel. At that point however, it was perhaps a case of too little too late. My personal crisis already took a life of its own and the damage was irreversible.

Regular Dinner Guest
Nonetheless, I continued my friendship with him. He would be a regular dinner guest at my place. He would always be invited to my Pizza Nites, and when his schedule allows it, he shows up.

Ending Thoughts
It's been years since I last saw him, but I take comfort knowing he's just around. His likes don't happen everyday. Coming across a man like him is like stumbling upon a diamond in the rough - a chance encounter with a magnificent life. I'm still an atheist and he's still my holy man.

doreen K
(Dec 16, 2019) wondering if this is the Terry Gallagher I knew years ago in Edmonton. I sang a lot. Your photo looks like you. And thought I would check and see. Blessings

Katrice Gomez Limchoc
(May 29, 2009) Hi! Let me introduce myself, I am Kat Gomez-Limchoc from the Philippines. I am looking for a way to get in touch with Fr. Terry Gallagher. I just read your account of how you met.....My American dad....was a peace corps worker in the Philippines in the 70's and my mom....was doing development work together with him and in those days they would hang out with Fr. Terry. They had a great friendship. My mom talks of him with love on her face even if it has been years since they had last spoken as they have lost touch. Recently, my mom thought about him suddenly and searched for him on the Internet. She was delighted to see him mentioned in your site. She asked me to try to reach him just because she wanted me to know him. So here I am. From what you wrote and from what my mom has told me, Fr. Terry does seem like someone worth knowing. Could you help me? Many thanks!

rmin B
(11 Jul 2006) so here i was navigating through your website to check out whats new with you and sagada. i see the link for fab people and i see fr. terry gallagher. this can't be the same fr. terry but it is. i did have the same experience with him when i used to go to church in scarberia. he is not your typical parish priest i said to myself. that was quite an experience and i would find myself actually listening to his sermons because of how he made it relevant to todays world. he has been a family friend for the longest time and it's a nice surprise to see him on your site. talk about parallel lives!! great site by the way and i will live vicariously through you. hehehe..rice and peace

»» next story: A Return to the Mossy Forest
»» next Peoplescape story: Chris Larsen